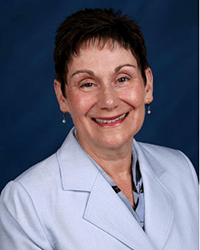 Debra Jeffs, Ph.D., RN, BC, FAAN is the Director of Academic Nursing Education and serves on the nursing leadership team at Arkansas Children's Hospital in Little Rock, Arkansas. Dr. Jeffs oversees all schools of nursing affiliations and approximately 1,300 student nurse placements annually within the hospital, serves on schools of nursing advisory boards, and advises nurses about returning to school for an advanced nursing degree. ACH continues to increase the percentage of RNs with a baccalaureate and higher nursing degree. Dr. Jeffs has provided education on research and evidence-based practice. She was part of the team that received a Blackboard Catalyst Award for Staff Development for the online version of the EBP Academy, a mentored education program for nurses. Dr. Jeffs was inducted as a fellow into the American Academy of Nursing, has been nominated for the Excellence in Research award and twice for the Nursing Leader of the Year award at ACH, and received a Leadership Recognition award from a Sigma Theta Tau International honor society chapter. She is board certified in nursing professional development from the American Nurses Credentialing Center. Dr. Jeffs holds an adjunct assistant professor faculty appointment in the College of Nursing of the University of Arkansas for Medical Sciences. Prior to joining Arkansas Children's Hospital, she had 25 years of nursing education experience as a faculty member in traditional and distance education in associate degree, diploma, baccalaureate, and master's degree programs.

Dr. Jeffs’ research has focused on pediatric pain management and professional development for nurses. She is interested in studying the effectiveness of non-pharmacologic interventions in an effort to improve pain management of children and adolescents. Dr. Jeffs conducted an ACRI ABI-funded research study to compare types of distraction including virtual reality (VR) on pain perception during burn wound care among adolescents in the ACH Burn Clinic and presented at the international American Burn Association meeting. Dr. Jeffs’ new study, “Novel Virtual Reality for Burn Wound Care Pain in Adolescents,” is supported by an Arkansas Children’s Research Institute President’s Award and builds on her prior VR study by using commercially available, high technology VR with adolescents during burn wound care in the ambulatory clinic setting. She previously received research funding from the Foundation of the New York State Nurses Association and a chapter of Sigma Theta Tau International. She has been a co-investigator on other grant-funded and non-funded research.

Dr. Jeffs served on the teams with other nurse leaders to establish the Nursing Research Alliance of the Capital Region in New York and the Arkansas Nursing Research Alliance. She has been a provider and reviewer of continuing nursing education for three state nurses associations. She serves as tri-chair of the Education Committee of the Arkansas Center for Nursing, Inc. and was the Co-Director for the Robert Wood Johnson Foundation State Implementation Program grant for the Arkansas Action Coalition to advance the Institute of Medicine’s Future of Nursing goals in Arkansas. Dr. Jeffs holds a diploma from Samaritan Hospital School of Nursing, bachelor of science and master of science in nursing degrees from Russell Sage College, (both schools in New York) and a PhD in nursing from the University of Massachusetts Amherst-Worcester.