Bikes Blues & BBQ has made a $200,000 commitment to Arkansas Children’s Northwest (ACNW), the largest commitment in their 16-year history of giving.

Springdale) December 9 – Bikes Blues & BBQ has made a $200,000 commitment to Arkansas Children’s Northwest (ACNW), the largest commitment in their 16-year history of giving. 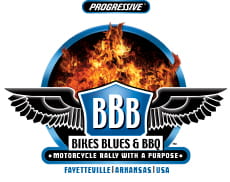 “Bikes Blues & BBQ is one of the only family-friendly motorcycle rallies in the country and we are deeply committed to being an organization with a purpose to better our community,” says Ken Mourton, board chair of Bikes Blues & BBQ. “Arkansas Children’s Northwest is one the most important economic developments in this area in the last 40 years. It is our honor to join the effort in bringing these crucial pediatric healthcare and wellness services to our community.”

“We are grateful to the entire Bikes Blues & BBQ team for providing a significant commitment on behalf of more than 200,000 children in our community.” says Fred Scarborough, President of Arkansas Children’s Foundation. “Their team contemplated how they could participate in ACNW’s Campaign for Care Close to Home and then stretched to make the largest commitment in their history. They exemplify the kind of partner that we hope to find in every individual and in every organization in Northwest Arkansas.”

When it opens in January 2018, the 233,613 square-foot hospital will be the region’s first and only comprehensive pediatric healthcare center. The campus is centrally located on I-49 between Don Tyson Parkway and Highway 412, across from Arvest Ballpark. Arkansas Children’s Northwest is an integral part of Arkansas Children’s plan to transform the health of children in Arkansas by expanding access to pediatric services across the region.

Arkansas Children’s, Inc. is the only hospital system in the state solely dedicated to caring for children, which allows the organization to uniquely shape the landscape of pediatric care in Arkansas. The system includes a 359-bed hospital in Little Rock with the state’s only pediatric Level 1 Trauma Center, burn center, Level 4 neonatal intensive care and pediatric intensive care, and research institute as well as a nationally-recognized transport service. It is one the 25 largest children’s hospitals in the United States and is nationally ranked by U.S. News World & Report in pulmonology and neonatal care. A sister campus is under development in Northwest Arkansas and will bring 233,613 square feet of inpatient beds, emergency care, clinic rooms and diagnostic services to children in that corner of the state. Arkansas Children’s also blankets the state with outreach programs that include telemedicine, mobile health, and school-based health solutions. A private nonprofit, Arkansas Children’s boasts an internationally renowned reputation for medical breakthroughs and intensive treatments, unique surgical procedures and forward-thinking research and is committed to providing every child with access to the best care available, regardless of location or resources. Founded as an orphanage, Arkansas Children’s has championed children by making them better today and healthier tomorrow for more than 100 years.