“Arkansas Children’s will not stop our pursuit of improving child health until Arkansas is the safest, healthiest place to be a child.”
–Marcy Doderer 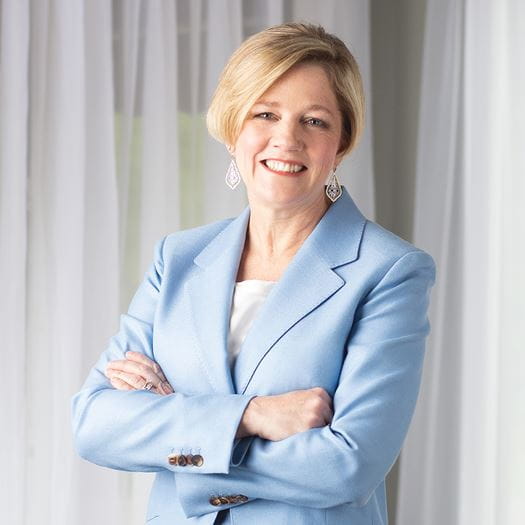 Marcy Doderer, FACHE, is president and chief executive officer at Arkansas Children’s where she leads the state’s only pediatric health system serving the 700,000 children in Arkansas.

Marcy has stated “Arkansas Children’s will not stop our pursuit of improving child health until Arkansas is the safest, healthiest place to be a child.”

Under Marcy’s leadership, Arkansas Children’s transformed from one hospital into a health system, with two hospitals, a research institute, a philanthropic foundation, regional clinics and alliances, telemedicine and statewide outreach programs. She has led the organization with an unwavering focus on the core values of safety, teamwork, compassion and excellence.

Prior to her role at Arkansas Children's, she served as a member of senior leadership for CHRISTUS Santa Rosa Health System in various capacities since 2002. Doderer became administrator for CHRISTUS Santa Rosa Children’s Hospital in 2008 and led the effort to transform the facility into the free standing Children’s Hospital of San Antonio. Her previous leadership experience includes positions at CHRISTUS St. Joseph’s Health System and McCuistion Regional Medical Center, both in Paris, Texas, and Presbyterian Hospital of Dallas, Dallas, Texas.

Marcy is a Fellow in the American College of Health Care Executives (ACHE) and active in many professional organizations. She serves as the Chair of the Children’s Hospital Solutions for Patient Safety Board of Directors and the Immediate Past Chair of the Children's Hospital Association Board of Directors. She is also a member of the American Hospital Association’s The Changing Workforce Task Force. Within Arkansas, Marcy is a member of Fifty for the Future and sits on the board of Healthy Active Arkansas.

Marcy has been recognized for her leadership both at the local and national level, including being named one of Modern Healthcare’s “Top 25 Women Leaders” in 2021. She was named Woman of the Year in 2020 by Women & Children First and Woman of the Year in Business in 2018 by the Women’s Foundation of Arkansas.

She obtained her BS in Finance from Trinity University, San Antonio, Texas, and MA in Hospital and Health Administration from The University of Iowa.

In 2020, Marcy Doderer was named Woman of the Year by Women & Children First. This honor highlights Marcy’s leadership efforts in working to make Arkansas the safest, healthiest place to be a child.

Arkansas Women’s Foundation – 2018 Woman of the Year in Business

In 2018, the Women’s Foundation of Arkansas recognized Marcy as the Woman of the Year in Business, giving recognition to Marcy’s leadership in improving healthcare for children in Arkansas.