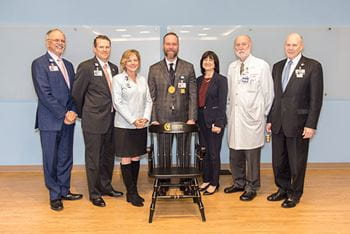 (Little Rock) April 5, 2018 – Arkansas Children’s Hospital and the University of Arkansas for Medical Sciences (UAMS) College of Medicine celebrated the investiture of Brian Reemtsen, M.D., as the recipient and steward of the Arkansas Log A Load For Kids Endowed Chair in Pediatric Cardiovascular Surgery on Wednesday, April 4.

Establishing endowed chairs provides Arkansas Children’s and UAMS the ability to recruit top-notch leaders in the medical field who can provide the best care for patients in Arkansas. An endowed chair or professorship remains the highest academic honor a university can bestow on its most distinguished faculty. Those named to a chair or professorship are among the most highly regarded scientists, practitioners and professors in their academic fields.

“Arkansas Children’s is proud to celebrate Dr. Brian Reemsten as the Arkansas Log A Load For Kids Endowed Chair in Pediatric Cardiovascular surgery,” said Marcy Doderer, president and CEO of Arkansas Children’s. “His unyielding commitment to providing children in the region the best possible care will provide a positive impact and a healthier tomorrow for generations to come.”

“Endowed chairs such as this reflect the long and vital partnership between UAMS and Arkansas Children’s,” said Christopher T. Westfall, M.D., interim dean of the UAMS College of Medicine. “It’s a partnership grounded in our integrated missions of education, clinical service and research. This endowed chair is a well-earned honor for Dr. Reemtsen, and we are honored to have him on our faculty.”

“UAMS and Arkansas Children’s are proud of the innovation and collaboration that Dr. Reemtsen has brought to the team,” said Rick Barr, M.D., chair of the Department of Pediatrics and associate dean for Child Health in the UAMS College of Medicine. “It is our mission to provide the best pediatric care for children in the region and thanks to Dr. Reemtsen’s commitment to excellence, we know he will serve the cardiovascular program at Arkansas Children’s well.”

Log A Load for Kids is a national program that raises funds for Children’s Miracle Network Hospitals, while promoting the logging and forestry community. Arkansas’ Log A Load For Kids program raises money for Arkansas Children’s Hospital. The Arkansas Forestry Association and Arkansas Timber Producers Association sponsor the program.

The program started in South Carolina in 1988 when two loggers dreamed of a way they could make a positive contribution to their local communities.  Their idea spread and each year and forestry groups began to raise millions of dollars nationwide for Children’s Miracle Network Hospitals. In the last 25 years, Log A Load of Arkansas has raised more than $9 million for programs and services at Arkansas Children’s Hospital and ranks No. 1 in the nation for fundraising.

Arkansas Log A Load For Kids Endowed Chair in Pediatric Cardiovascular Surgery was established in 1999 through the group’s fundraising efforts through a $1.5 million endowed chair at Arkansas Children’s Hospital.

Additionally, Arkansas Log A Load For Kids has funded a $1.5 million endowment for the Angel One helicopter transport program, raised $1 million for a Pediatric Imaging and Radiation endowment and raised $4 million for the emergency department/trauma center in the hospital’s South Wing expansion project. In 2017, Arkansas Log a Load for Kids committed to raising $1.5 million over two years to fund the cardiothoracic surgery endowment chair.

Reemtsen earned his medical degree from New York Medical College. He completed his internship and residency at the UCLA School of Medicine, Los Angeles, and also served as chief resident at UCLA. He trained as a fellow in cardiac surgery at the University of Washington. He completed a 12-month Fellow Congenital Heart Surgery Program in 2004 at the Department of Cardiothoracic Surgery, Great Ormond Street Hospital in London, England. Reemtsen is board certified by the American Board of Surgery, American Board of Thoracic Surgery, and Congenital Heart Subspecialty. He is a member of the American Medical Association and Western Thoracic Surgical Association, president of the Longmire Surgical Society, and a candidate member of the Society of Thoracic Surgeons.

Reemtsen serves as director of the Heart Institute at Arkansas Children’s Hospital and as a professor of surgery in the UAMS College of Medicine’s Department of Surgery. As the chair holder of the Log A Load For Kids of Arkansas Endowed Chair in Pediatric Cardiovascular Surgery, he will designate endowed funds to support the cardiovascular surgery program at Arkansas Children’s Hospital.