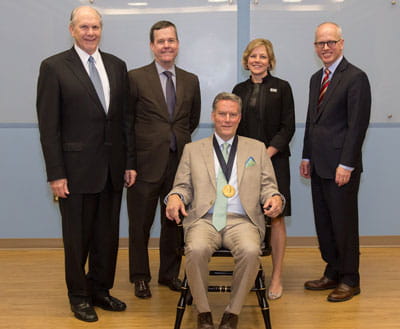 In 2006, the Arkansas Children’s Hospital Board of Directors created this chair in honor of Dr. Fiser’s service and commitment to championing children. He served as chairman of the Department of Pediatrics at UAMS from 1975–1994. At age 32, he became the youngest pediatric department chairman in the United States.

“Arkansas Children’s proudly celebrates Dr. Rick Barr as the chair holder for the Robert H. Fiser, Jr., M.D., Endowed Chair in Pediatrics,” said Marcy Doderer, president and CEO of Arkansas Children’s. “Dr. Barr serves a vital role as a physician leader at Arkansas Children’s and his partnership is helping to change the story for children by continuing efforts to make our state one of the healthiest and safest places for children.”

On October 1, 2017, Dr. Rick Barr assumed the role of pediatrician-in-chief for Arkansas Children’s and as chair of the Department of Pediatrics and associate dean for child health in the UAMS College of Medicine. He succeeded, Richard F. Jacobs, M.D. who retired in June of 2017 after 35 years of service on the UAMS faculty and Arkansas Children’s team.

“Dr. Barr is a leader who has played a key role in strengthening our partnership with Arkansas Children’s to provide a healthier tomorrow for the children of Arkansas,” said Cam Patterson, M.D., MBA, chancellor of UAMS. “Through this endowed chair, Dr. Barr will continue to lead the Department of Pediatrics to pursue innovative ideas, programs and projects to move the needle on children’s health.”

Establishing endowed chairs provides ACH and UAMS the ability to recruit top-notch leaders in the medical field who can provide the best care for patients in Arkansas. An endowed chair or professorship remains the highest academic honor a university can bestow on its most distinguished faculty. Those named to a chair or professorship are among the most highly regarded scientists, practitioners and professors in their academic fields.

Barr formerly served as the Suzan B. Thames endowed professor, chair of the Department of Pediatrics and senior associate dean for Graduate Medical Education at the University of Mississippi Medical Center. He was also physician-in-chief at Children’s of Mississippi/Batson Children’s Hospital. Barr served on the faculty at Vanderbilt University from 1995 to 2010, and was chief of the Division of Pediatric Critical Care from 2007 to 2010. He also served as co-director of Vanderbilt University Master’s in Clinical Investigation Programs). From 2010-2011 he was an endowed professor of Pediatric Critical Care and director of the Clinical and Translational Research Center at Cincinnati Children’s Hospital and the University of Cincinnati.

Barr received his medical degree from the University of Virginia in 1988, and completed his residency in pediatrics at Vanderbilt. Barr completed a clinical fellowship in pediatric critical care at the University of California San Francisco, where he was also a research fellow in the Cardiovascular Research Institute. While on the faculty at Vanderbilt, he obtained a Master’s of Science in clinical investigation.