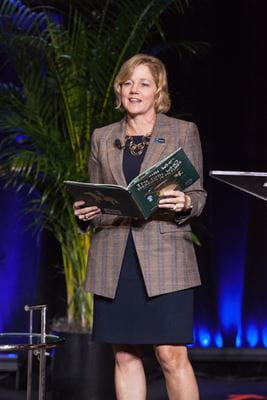 “Making kids better today and healthier tomorrow has to be more than a slogan,” Arkansas Children’s President & CEO Marcy Doderer, FACHE, told the board members, donors and volunteers gathered for the forum. “It has to be our way forward. It starts with a shift in perspective, a fundamental difference in how we think. We must focus as much on the health of children who never walk through our doors as we do the health of children who repeatedly walk through our doors.”

The specific challenges Arkansas Children’s and its community partners will navigate in the next five years include developing strategies to decrease infant mortality and address healthier neighborhoods, child abuse prevention, food security and behavioral health.

Doderer challenged the crowd to think about the partners who will help Arkansas Children’s make that vision a reality, ranging from donors and corporate business to state agencies and other non-profits.

The event also included a salute to Walmart, thanking the millions of associates who together reached the $1 billion mark in funds raised for children’s health through Children’s Miracle Network Hospitals since 1987. Walmart made their historic announcement early Wednesday morning at a Walmart location in Hoboken, N.J.

"It's an honor and a privilege to celebrate Walmart associates’ dedication to children's health," said Fred Scarborough, CFRE, president of Arkansas Children's Foundation and chief development officer for Arkansas Children’s. "We are thrilled to recognize these steadfast partners for their dedication as champions for children."

The Arkansas Children’s Hospital Nursery Alliance began in November, 2016 and has since grown to include five hospitals across the state with Level I and II nurseries. The partnership directly coordinates care between neonatologists at ACH’s Neonatal Intensive Care Unit (NICU) and physicians working in nurseries at community hospitals, including Conway Regional Health System, Jefferson Regional Medical Center, CHI St. Vincent Hot Springs and Ashley County Medical Center. The fifth member, Medical Center of South Arkansas in El Dorado, was announced during the event.

Membership in the alliance strengthens the capabilities of Level I and Level II nurseries. Should an infant require Level IV NICU care, Angel One Transport is standing by to deliver the newborn to Arkansas Children’s Hospital. The alliance and its allied hospitals collaborate and review quality data, grow and enhance care, and implement best practices in order to further improve the quality of care in Arkansas’ nurseries and the health and safety of all newborns.

The collaboration addresses one of the state’s most vexing health problems: infant mortality. For every 1,000 babies born in the state, 8 die before their first birthdays.

“It takes innovative partnerships to ensure that every Arkansas child reaches his or her potential,” Doderer said. “We are grateful for each hospital that has made the commitment to further strengthen the care for their newborns by joining the alliance. They’re truly delivering on that promise of a healthier tomorrow.”

The Betty A. Lowe MD Award is given biannually to an individual or group who through personal initiative, service and leadership have made a significant contribution to the health and well-being of the children of Arkansas. Dr. Lowe served as the medical director of Arkansas Children's Hospital from 1977 to 2001. In 1993, she served as the president of the American Academy of Pediatrics and was the first Arkansas and the second woman in the nation's history to hold this title.

Past Betty A. Lowe Award recipients include: