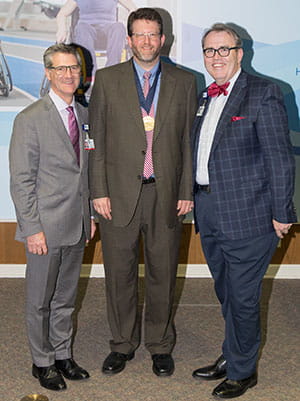 “Endowed chairs create opportunities to invest in professionals who are dedicated to transforming healthcare delivery and advancing child health,” said Fred Scarborough, president of Arkansas Children’s Foundation. “We are proud to honor Dr. Ashley Ross and Walmart – who has been a partner and supporter of Arkansas Children’s for more than 30 years.”

In 1987, Sam Walton, founder of Walmart and Sam’s Club, committed his company and its resources to raising money for children's hospitals. Thanks to the countless hours volunteering and fundraising through their partnership with Children’s Miracle Network Hospitals, Walmart and Sam's Club associates across the US and Canada have raised $1 billion and have helped hundreds of millions of children. This represents the largest cash amount raised by a company for a nonprofit.

The Walmart Endowed Chair in Neonatology was generously established by Walmart in 2007.

Endowed chairs provide Arkansas Children’s and UAMS the ability to recruit top leaders in the medical field who can provide the best care for patients. An endowed chair or professorship remains one of the highest honors that UAMS and Arkansas Children’s can bestow on its most distinguished physicians. Those named to a chair are among the most highly regarded scientists, practitioners and professors in their fields.

Dr. Ross attended UAMS in Little Rock, Arkansas where he graduated in 2000.  Dr. Ross accepted a pediatric residency position at Wake Forest University in Winston-Salem, North Carolina and completed this residency in 2003. Afterward, he started his Neonatology fellowship at the UAMS and ACH.  He completed his fellowship training in 2006 and accepted an appointment in the College of Medicine at UAMS as an Assistant Professor of Pediatrics in the Section of Neonatology.  In 2008, he assumed the role of Neonatal-Perinatal Fellowship Director until 2015.  He was recognized with the Residency Educator of the Year Award in 2011 for his work with the Neonatal-Perinatal Fellowship Program at UAMS and ACH and was appointed to Associate Professor at the UAMS College of Medicine in 2012.

Dr. Ross was honored with the Chris Hackler Award for Excellence in Medical Ethics at UAMS in 2013.  In 2016, along with ACH, Dr. Ross helped established the ACH Nursery Alliance as a statewide collaborative of delivery hospitals focused on improving outcomes for all neonates and reducing Arkansas’s infant mortality rate. He was named the Neonatology Section Chief at UAMS and ACH in 2017.  The ACH Nursery Alliance received the Arkansas Children’s Foundation Betty A. Lowe award in 2018 for making significant contributions to the health and well-being of the children of Arkansas.  Most recently, Dr. Ross was honored with the 2019 Ruth Olive Beall Award awarded biannually to a physician of distinction who consistently displays the Arkansas Children’s values of safety, teamwork, compassion and excellence.

Arkansas Children's, Inc. is the only healthcare system in the state solely dedicated to caring for Arkansas' 710,000 children, giving the organization a unique ability to shape the landscape of pediatric care in Arkansas and transform the health of children throughout the region. The private, non-profit organization includes two pediatric hospitals, a pediatric research institute and USDA nutrition center, a philanthropic foundation, a nursery alliance, statewide clinics, and many education and outreach programs.

Arkansas Children’s Hospital (ACH) is a 336-bed, Magnet-recognized facility in Little Rock operating the state’s only Level I pediatric trauma center; the state's only burn center; the state's only Level IV neonatal intensive care unit; the state's only pediatric intensive care unit; the state’s only pediatric surgery program with Level 1 verification from the American College of Surgeons; and the state's only nationally recognized pediatric transport program. Additionally, ACH is nationally ranked by U.S. News & World Report in five pediatric subspecialties (2019-2020): Cardiology & Heart Surgery, Nephrology, Neurology & Neurosurgery, Orthopedics and Pulmonology. Arkansas Children’s Northwest (ACNW), the first and only pediatric hospital in the Northwest Arkansas region, opened in Springdale in early 2018. ACNW operates a 24-bed inpatient unit; a surgical unit with five operating rooms; outpatient clinics offering over 20 subspecialties; diagnostic services; imaging capabilities; occupational therapy services; and Northwest Arkansas' only pediatric emergency department, equipped with 30 exam rooms. Generous philanthropic and volunteer engagement has sustained Arkansas Children's since it began as an orphanage in 1912, and today ensures the system can fundamentally transform the health of children in Arkansas and beyond. To learn more, visit archildrens.org.