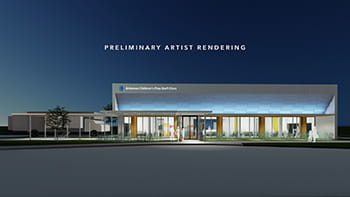 “Simmons Bank has a rich history of supporting the communities we call home, especially our hometown community of Pine Bluff,” said George A. Makris Jr., chairman and CEO of Simmons Bank. “We are proud to invest in the new Arkansas Children’s Pine Bluff Clinic on the Jefferson Regional campus and provide a vital healthcare resource for families in the region.”

To celebrate this leadership gift, the clinic lobby will be named in honor of Simmons Bank.

“In these unprecedented times with the COVID-19 health crisis, we are incredibly grateful for the support of Simmons Bank,” said Marcy Doderer, FACHE, president and CEO of Arkansas Children’s. “We continue to care for sick and vulnerable children because we know that delayed care could result in lifelong health complications. Our children need us now more than ever.”

According to data by the Henry J. Kaiser Family Foundation, 52 percent of children in Arkansas do not receive coordinated, ongoing, comprehensive care within a medical home. The new pediatric clinic will provide care close to home for families in southeast Arkansas, including preventative care, developmental screenings, community resources and health education.

Initial plans estimate that the Arkansas Children’s Pine Bluff Clinic will be an approximately 10,000 square-foot facility with 14 exam rooms, team collaboration space and a welcoming lobby with kid-savvy spaces. The clinic physicians will also provide frontline care to newborns receiving care in the NICU who are delivered at Jefferson Regional. The new clinic requires a $17.5 million investment to fund construction and operating expenses over the first five years.

“Jefferson Regional provides vital health care to the southeast region of Arkansas,” said Brian Thomas, president and CEO of Jefferson Regional. “Providing a new pediatric clinic in association with Arkansas Children’s will ensure we have long-term stability to continue providing the children of this region great healthcare. Jefferson Regional is grateful for the continued support from Simmons Bank.”

Campaign for a Healthier Tomorrow

By most national measures, Arkansas is one of the least healthy states ranking 40 out of 50 states in overall child health and well-being. Arkansas Children’s envisions a healthier tomorrow for all 710,000 children in the state – for both longtime patients and the children who will never walk through the doors of Arkansas Children’s.

Since 2015, the Campaign for a Healthier Tomorrow has secured more than $220 million in gifts toward a $250 million goal:

Arkansas Children's, Inc., is the only healthcare system in the state solely dedicated to caring for Arkansas' 710,000 children. The private, non-profit organization includes two pediatric hospitals, a pediatric research institute and USDA nutrition center, a philanthropic foundation, a nursery alliance, statewide clinics, and many education and outreach programs — all focused on fulfilling a promise to define and deliver unprecedented child health. Arkansas Children’s Hospital (ACH) is a 336-bed, Magnet-recognized facility in Little Rock operating the state’s only Level I pediatric trauma center; the state's only burn center; the state's only Level IV neonatal intensive care unit; the state's only pediatric intensive care unit; the state’s only pediatric surgery program with Level 1 verification from the American College of Surgeons (ACS); the state’s only magnetoencephalography (MEG) system for neurosurgical planning and cutting-edge research; and the state's only nationally recognized pediatric transport program. Additionally, ACH is nationally ranked by U.S. News & World Report in five pediatric subspecialties (2019–2020): Cardiology & Heart Surgery, Nephrology, Neurology & Neurosurgery, Orthopedics and Pulmonology. ACH is one of only five hospitals in the nation that have achieved Magnet Status, ACS Level 1 verification and a Beacon award from the American Association of Critical-Care Nurses. Arkansas Children’s Northwest (ACNW), the first and only pediatric hospital in the Northwest Arkansas region, opened in Springdale in early 2018. ACNW operates a 24-bed inpatient unit; a surgical unit with five operating rooms; outpatient clinics offering over 20 subspecialties; diagnostic services; imaging capabilities; occupational therapy services; and Northwest Arkansas' only pediatric emergency department, equipped with 30 exam rooms. Generous philanthropic and volunteer engagement has sustained Arkansas Children's since it began as an orphanage in 1912, and today ensures the system can champion children by making them better today and healthier tomorrow. To learn more, visit archildrens.org.

Simmons Bank is an Arkansas state-chartered bank that began in 1903. Through the decades, Simmons has developed a full suite of financial products and services designed to meet the needs of individual consumers and business customers alike. Simmons has grown steadily and today operates more than 200 branch locations throughout Arkansas, Illinois, Kansas, Missouri, Oklahoma, Tennessee and Texas. Simmons is the subsidiary bank for Simmons First National Corporation (NASDAQ: SFNC), a publicly traded bank holding company headquartered in Pine Bluff, Arkansas, with total consolidated assets of $20.8 billion as of March 31, 2020. For more information, visit https://simmonsbank.com/.