Your child's care is important, especially during the COVID-19 pandemic. Care shouldn't be delayed any longer. We're taking extra measures to keep you safe.

From surgery to complex conditions.

Our resources and educational information help parents and families learn how to provide effective care at home.

You can champion the more than 390,000 children treated at Arkansas Children's every year in a variety of ways.

For Jessica and Andy Hutchinson, a simple summertime family outing quickly turned deadly. While Jessica ran errands, Andy took their three children - Morgan, 7, Cameron, 5, and 3-year-old Ryan - to a soccer field near their home at Little Rock Air Force Base, where Andy is stationed. Andy ran to retrieve the ball and turned around just in time to see the big, heavy soccer goal falling over. He breathed a sigh of relief as the goal cleared Cameron’s head, but then he saw a horrifying sight: little Ryan lying motionless in the grass.

As Andy cradled his unconscious son, he noticed a terrible bulge on Ryan’s forehead. Then he realized something that made his heart stop…Ryan wasn’t breathing. After calling 911, Andy performed CPR on his son until the helicopter arrived to take him to the at Arkansas Children’s Hospital.

Jessica says of those first terrifying moments in the ED: "Ryan’s care team was shouting his name. There were lots of people around him, so I couldn’t tell what was going on. It was so scary."

A CT scan of Ryan’s head showed the trauma was severe--;he needed surgery immediately. The soccer goal had hit the back of Ryan’s head, causing multiple fractures and pushing part of his skull forward. The expert at ACH removed bone fragments from his brain and stabilized his skull. Even before Ryan woke up from the first surgery, his care team decided to perform a second operation to relieve the swelling in his brain. 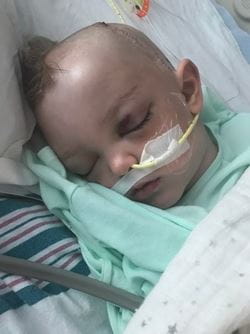 Jessica remembers the first time she saw Ryan post-surgery: "There were so many stitches and all this swelling. Ryan was hooked up to machines, and everything was beeping. I just felt so sad."

After surgery, Ryan was moved to the Although Jessica and Andy were nervous about moving to a different unit, it quickly became apparent their son - and their family - were in excellent hands.

"The nurses were awesome," she says. "They wanted us to get something to eat, and then lay down to get some rest…especially Andy, after everything he’d been through. So they were not only advocating for Ryan, they were looking out for us as well."

According to Jessica, made all the difference to Ryan’s recovery. "Before Ryan could speak or move much, , the music therapist, would come to our hospital room and ," says Jessica. "Ryan couldn’t do much, but he’d scoot to the edge of the bed so he could see and hear Andrew better."

Jessica and Andy are grateful for the life-saving work happening at Arkansas Children’s every day – and to the who make it possible. "You might feel like you’re throwing a little tiny stone into a great big pond," says Jessica. "You might think, 'Arkansas Children’s probably needs so much money and what can I really do?’ But your gift combined with everyone else’s makes a huge difference. Every little bit matters."

Andy describes Ryan’s recovery as the journey of "a thousand tiny little steps." Watch this video to see how he's doing now. You can give more children like Ryan the chance for a healthier tomorrow with a gift to Arkansas Children's. Click to give today!